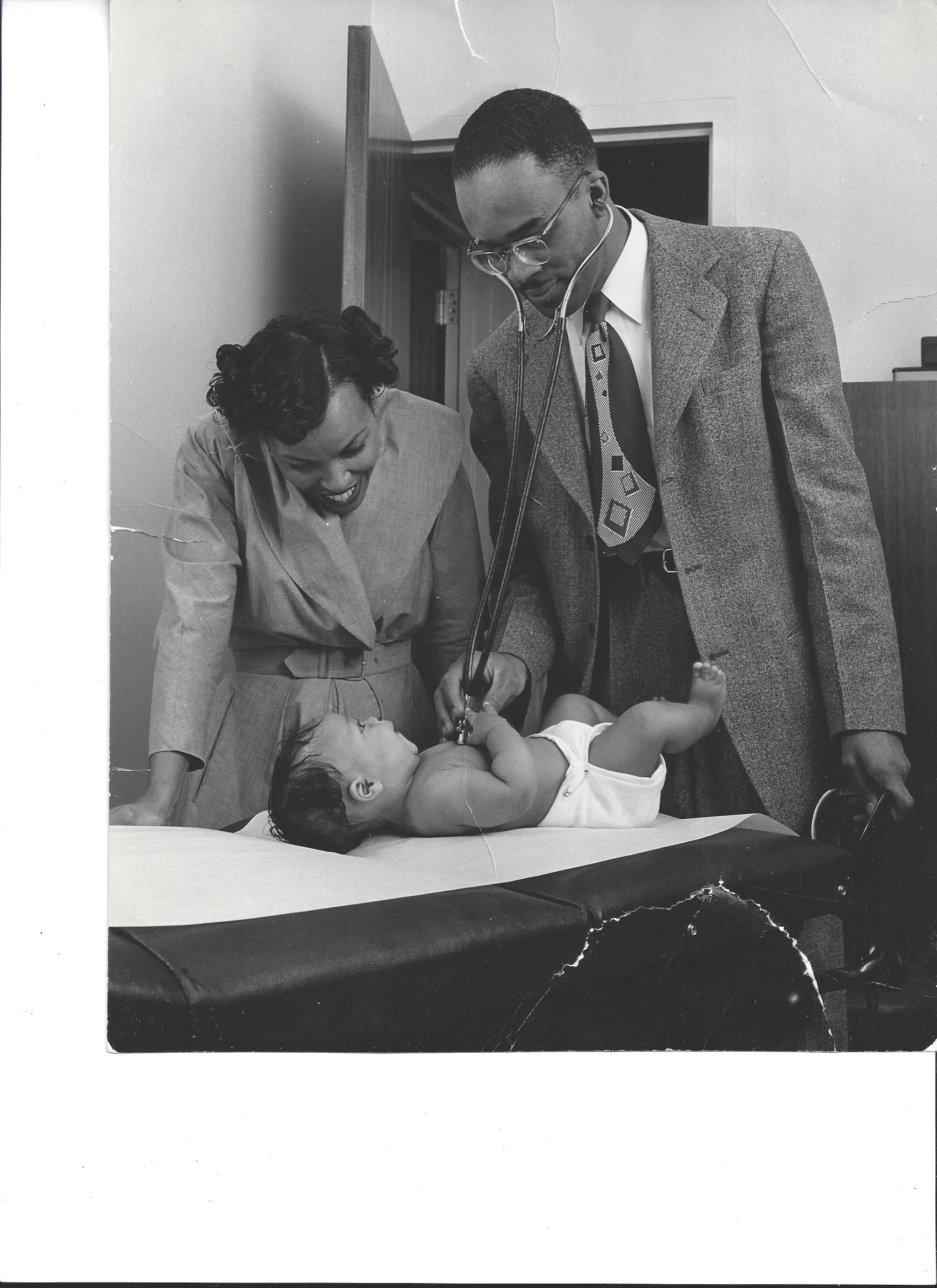 “If you know whence you came there is really no limit to where you can go.”  James Baldwin

The University of Colorado School of Medicine was launched in 1883.   The new medical school, despite the sentiments about co-ed medical education at the time, did offer medical school admission to “all persons of either sex.”  There was no such provision for African Americans.  Though the early female students may not have been welcomed with open arms, the first female graduated in 1891.  However, it was over 4 more decades, in 1947, before Colorado University (CU) School of Medicine graduated the first African American student, Dr. Charles J. Blackwood.  He was featured in the CU Alumnus magazine on stage with Dr. Florence Sabin with a caption that described him as the first “Negro” graduate.

Black History Month is a great time to recount the life and legacy of this great Colorado pioneer.

Dr. Blackwood was a native Coloradan.  He was born on September 25, 1921 in Trinidad, Colorado. His dad was a trained electrician who worked as a diesel technician for the Burlington Railroad system.  At one point his dad was believed to be the only African American to hold this job in the United States.  His mom was a homemaker.  Growing up Dr. Blackwood was an active member of Grace Chapel A.M.E Church.  He graduated from Trinidad High School.  His son, Charles Blackwood, III shared that his dad wanted to run off with a band, but his family encouraged him to go to college.  Dr. Blackwood’s oldest sister said they always knew that he would become a doctor.  He graduated from Trinidad State Junior College with honors.  After completing his junior college education, he received a scholarship to attend University of Colorado at Boulder.  He graduated with a bachelor’s degree in chemistry.

He entered medical school in 1943 and was also a private in the United States Army.  Dr. Blackwood successfully graduated from CU School of Medicine in 1947.  A 2005 article in the Chronicle – News, Trinidad, Colorado, mentioned that during medical school Dr. Blackwood could only sit certain places in the lecture hall and his living arrangements were separated from the rest of his classmates.  Nevertheless, Dr. Blackwood graduated at the top of his class, in the top 10.  He subsequently completed an Internship at Harlem Hospital in New York City.  This is where he met his wife-to-be, Vivian M. Eldridge, a nurse.  After the internship he returned to Colorado where he completed a two-year residency training in Medicine at Colorado General and Denver General.  During this time, he was the only African American to serve as Police Surgeon for the Denver Police Force.  Upon completing his residency, Dr. Blackwood became the Supreme Physician for the American Woodmen in Denver, Colorado and started his private practice.  He also was appointed to the staff of Colorado General Hospital as an instructor in the medical clinic and was on the staff of General Rose Hospital.  He then served three years with the United States Air Force from 1952-1955.  A highlight of his Air Force service was that he opened the Radiology Department at Hamilton Air Force Base in Marin County, California.  He was honorably discharged as a captain and returned to Denver to continue his private Internal Medicine practice.  He was appointed to the medical staffs of St. Luke’s Hospital and General Rose.  He was the first African American physician on staff at St. Luke’s.  He was the first African American clinical professor of medicine at University of Colorado School of Medicine.

During Dr. Blackwood’s years of practice, he had many patients who could not pay for their treatment, but he never turned them away.  There are still patients who talk about his kindness, compassion, and the great care that they received from Dr. Blackwood.  He was indeed a hard worker, with lots of patients, but his son has fond memories of the time and focused attention he received from his dad.  He remembers luncheon dates with his dad at Pierre’s or listening to music.

Dr. Blackwood was a member of a number of organizations including Kappa Alpha Psi fraternity, International AIDS project, Colorado Epilepsy Association, and Sertoma Club.  His spare time was spent fishing, playing bridge, golfing, reading, and listening to jazz.  He loved music.  Nancy Wilson was one of his favorite female vocalists.

After retiring from his clinical practice, he organized the Blackwood Institute that focused on AIDS project and began writing a book on Holistic Medicine.  He died August 11, 1993.  His funeral was held at a historic site in Five Points and then he was buried where he was born, in Trinidad, Colorado.

But the story does not end there.  During Black History Month, February 25, 2005, CU School of Medicine and UCDHSC Office of Diversity hosted an event in honor of Dr.  Charles J. Blackwood, Jr.  Rashaan Ford a CU medical student at the time, shared his thoughts on this pioneer,  “I’m sure that only an infinitely strong, motivated, and determined person would be able to endure those types of stresses on top of a grueling medical school career in order to keep looking onward  to persevere and succeed.”  Furthermore, Ford articulates why Dr. Blackwood is truly a pioneer.  He said: “I feel ultimately indebted to him [Dr. Blackwood].  I feel like he helped pave the way for me and many of my classmates and colleagues to matriculate here.  I also realize like Dr. Blackwood, we all have to keep looking forward and continue to make strides to heighten and maintain this diversity.  Hopefully we can pave the way somehow for future generations of diverse students.”

Also, in 2005 the State of Colorado Senate and the House or Representatives honored Dr. Charles J. Blackwood for being a “devoted public servant, an outstanding citizen, and admired physician and a true pioneer.”

Let’s continue to honor and pay tribute to Dr. Charles J. Blackwood in 2020 and beyond, by maintaining a sharp focus on educating Black doctors, serving the community, and being leaders and role models for future generations.

If you would like to know more about how you can honor Dr. Blackwood,  please send us a note to: info@coloradoblackhealth.org

Just for the Health of it!