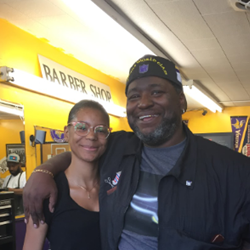 This story was captured before COVID-19 hit.

Tank’s barbershop has been around the Denver metro area for over 14 years.  Going through his own health journey of losing weight, eating better and being more active, he partnered with Colorado Black Health Collaborative (CBHC) so his customers get the opportunity to know more about their own health too.  Many testimonies have emerged from his partnership with CBHC, but today, in this little slice of Minneapolis in Denver, we get to hear Tank’s own testimony.

As I walked into Tank’s barbershop, the first thing I noticed was the instantaneous feeling of being in a genuine space.  I was welcomed into this friendly environment as soon as I stepped in through the door.  The bright yellow walls were adorned with sports pendants for the Minnesota Vikings and the Minnesota Twins.  Hints of purple and gold everywhere.  It was a little slice of Minneapolis in the middle of Denver.  Some game was playing on TV in the background while Tank, his daughter and his old friend, Calvin Hale, were enjoying a plate of ribs.  I came on a quieter day, which was perfect, so I could get to know Tank a little more.

Tank was born in Gary, Indiana, but was raised in Minneapolis.  He came to Denver about 20 years ago.  Since, he has some family out here and he decided to raise his own here in Denver too.  He’s been a barber for over 25 years, graduating from Moler Barber College in Minneapolis, MN.  It all started with cutting hair of some of his buddies in the locker room.  He noticed he had a talent and all the guys in the neighborhood would tell him to go to school for it.  It wasn’t until he was about 21 years old that he thought it was about time.  He had one kid and seeing that other barbers were doing well, he knew going to school for this would in turn take care of him.

There have been so many rewarding things for Tank, some of the most he discussed are that people come to him and trust him in their look.  He truly enjoys that.  He describes it as, “It’s like painting a Picasso, I’m an artist in what I’m doing.”  They trust him, and he promises to deliver on their expectations.  It completely makes his day when his customers are happy with the results.  He’s been running his shop for over 14 years.  At one point, there was another shop Tank opened in Aurora, CO, but it became too stressful and he didn’t like micromanaging.  Simply put, “It’s hard to duplicate yourself.”

Outside of his shop, Tank enjoys fishing, barbecuing in his yard, spending time with his family and anything sports related (biggest Vikings fan).  He has 4 kids (3 girls and 1 boy).  One of which was at the shop when we spoke, Ivonne.  She’s Tank’s youngest.  It’s clear how much of a family man Tank is.  I found it hilarious when I saw a sign on his wall listing the “rules to dating his daughter”.  This sense of humor and energy transcends throughout the entire shop.  After getting to know a bit about Tank’s life, we dove into discussing the importance of our health and his partnership with CBHC.

Tank has partnered with CBHC since the beginning.  CBHC’s Barbershop/Salon Program started in February 2012 and he was connected to CBHC through the Denver Health Program.  He says that his clients that come down for a cut don’t typically know their blood sugar nor blood pressure levels.  There’s even been a few instances where they were told to go to the hospital immediately because their blood pressure levels were that high.  This drives Tank because it makes him feel like he’s saving lives in a way.  Hosting our program in his shop really works.  He loves that he’s able to give back to his community in this way.  He feels like being a barber means this is a part of the job– giving back.

“You know starting out when Dr. Connor and crew were coming in, I was weighing over 500lbs.”

Tank has lost over 200 lbs. since getting involved with CBHC.  He couldn’t help but think that having CBHC get his clients’ health on track while he was sitting there over 500 lbs. was hypocritical.  So that’s when he decided he needed to make some changes.  He started going to the gym, working out and eating better.  Now being over 200 lbs. less than he was, he thanked CBHC for giving him the tools that allowed him to do so.  Looking back at old photos, he says, “it’s like night and day.”  We couldn’t be more proud of him.

Tank recognizes that we work in barbershops, beauty salons, churches and more from hours done through volunteering.  He shared his deep gratitude for our program and everyone who runs it on their own time and dime.  He thinks that our program could benefit more if there was more financial support.  By receiving a stipend or something along those lines.  He highlighted that CBHC provides education material, clinic recommendations, etc. enough to where his clients are receiving health information without getting too personal but thinks we should consider having more tools for things like HIV tests as an option for people.  He understands that might be too personal but thinks it might be a good option to have in case people are even interested in knowing where to go and get tested if it isn’t something we do in barbershop settings.

Tank and his barbershop have such a rich history in our Denver community.  He’s built many relationships, which was very clear in just observing his interactions with clients.  Even as we were speaking, Calvin Hale, had a few words he wanted share about Tank:

“If I might interject something about this man here, he has helped me so much that sometimes I could cry.  Since we first met, he’s been a brother to me.  Have you ever had someone that you could depend on, that’s not your family?  You understand what I’m saying, this is what he is to me, he’s better to me than my family.  I’m not saying this because he’s in front of me, I’m saying it because it’s the truth.  He’s helped me so much, and I’d like to think that I’ve helped him once or twice too.  But you know he’s been there for me.  I come down here and hang out at the barbershop and carry on and you know it’s a comradery between that gentleman right there and myself.  We help each other, you know, and what makes it so genuine is that he’s not family, he’s better than that.”